Watermark has the perfect tour for your group event.

Planning a trip to Annapolis or Baltimore for your family, social, military, reunion, or church group? Walk or ride through the Historic Streets of Annapolis, the Capital of Maryland and home to the United States Naval Academy. In the Historic Seaport City of Baltimore our Colonial Attired Guide will step aboard your motor coach as you travel the streets of this wonderful Charm City.

Tour the Annapolis Historic District and discover why Baltimore is called Charm City. Our Group Tour Specialist will create an itinerary specially designed for your group. Contact us to reserve your spot today. 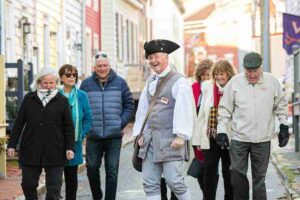 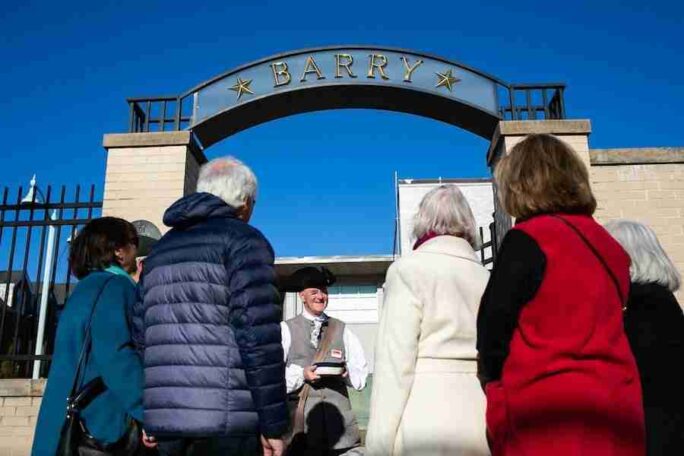 Our colonial attired tour guides will bring history to life. Stroll through the historic places and rich traditions of downtown Annapolis and be inspired by the sights and sounds of the U.S. Naval Academy, home to over 4,000 midshipmen. (Building interiors when available.)

Tour the Maryland State House, the country’s oldest capital in continuous legislative use. Our colonial attired guide will step aboard your motor coach for a driving tour of historic Annapolis. View St. Anne’s Church, Severn River Overlook, and the Maryland World War II Memorial. Step off again for a walking tour of the United States Naval Academy. The Naval Academy tour includes a walking tour of the hallowed grounds of the Academy, home to over 4,000 midshipmen. Led by a Colonial-attired guide on both coach and stroll. Perfect for Senior Groups. (2 and 3 hour tours available.)

Let our colonial attired guide step aboard your motor coach as you travel the streets of historic Annapolis. Learn about the rich and diverse history of this special place as you pass the Maryland World War II Memorial and the scenic Severn River Outlook. (1 hour tour) 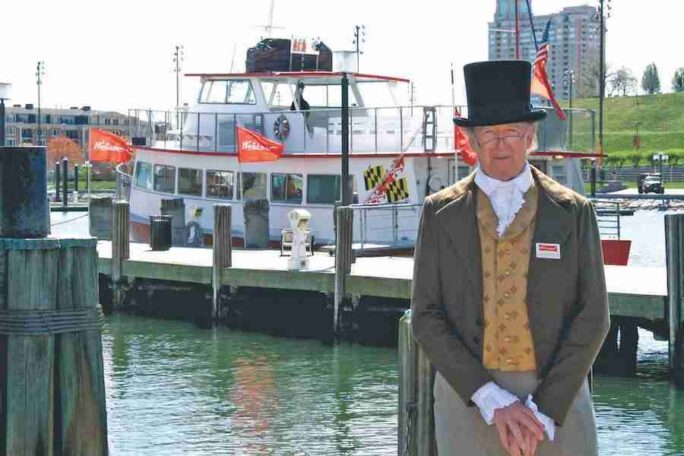 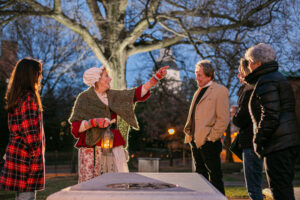 Enjoy a full day of iconic Chesapeake Bay culinary tidbits, traditions, and history! Your historically attired guide will be with you throughout the day, and you choose your itinerary! Visit Ram’s Head Tavern where your group will enjoy crab soup and tales of this 300-year-old brewery. Then, you will have the choice of a guided tour at the Maryland State House, or a coach tour followed by a Chesapeake-inspired lunch at a local Annapolis restaurant. After lunch, you may enjoy Berger cookies at the Paca House or Smith Island Cake, the official Maryland State Dessert, at Historic Londontown. End your day with an Annapolis Harbor & USNA Cruise for the ultimate Annapolis experience!

As the sun sets on the horizon and darkness begins, our colonial guides will lead you by candlelight through this historic and haunted town. Come hear stories of old and see if you can catch a glimpse of the spirits who still linger in the midst. 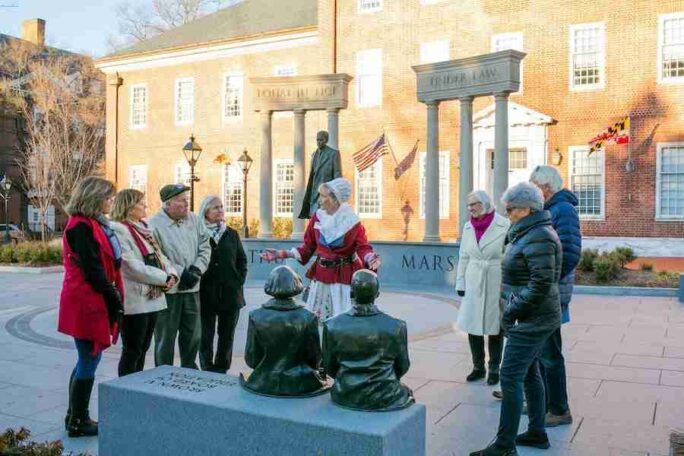 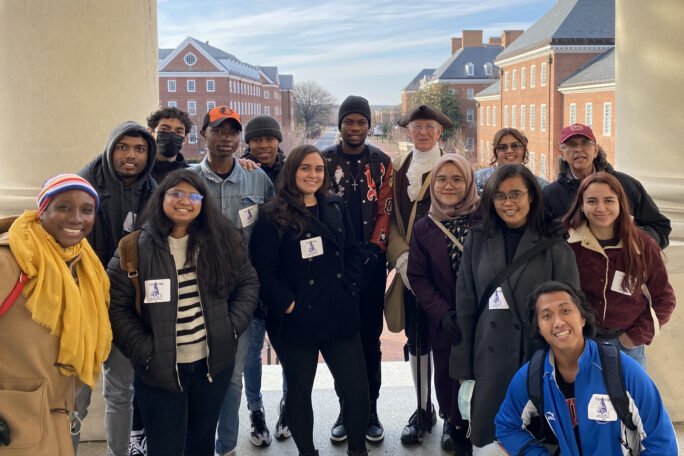 Armed with clues, Watermark colonial guides will help your group discover the hidden secrets of Annapolis. To find the answers, teams will visit a variety of Annapolis landmarks, all within a half-mile radius of Annapolis City Dock. Inscriptions on statues will be read, architectural features of buildings identified, and other notable landmarks will be searched to answer the scavenger hunt riddles. 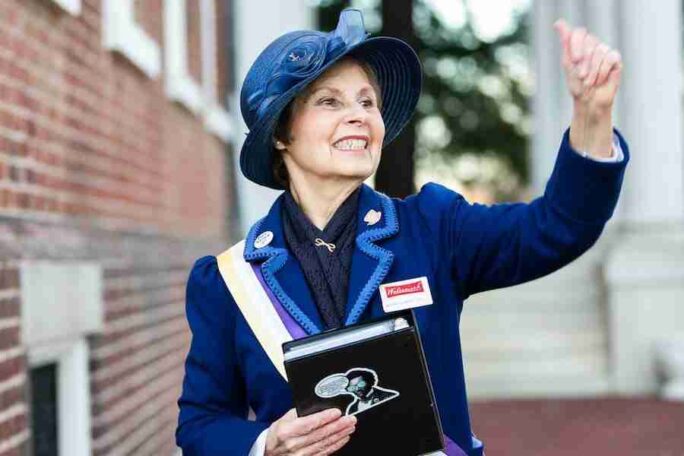 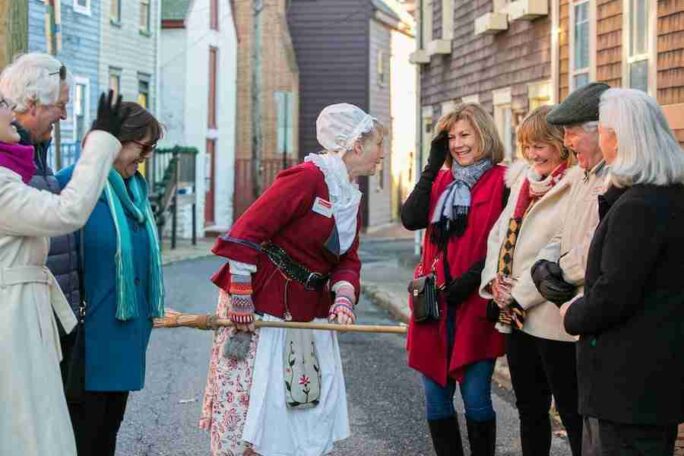 Enjoy a leisurely two hour stroll in Annapolis’ historic district led by a guide in colonial dress. Visit sites connected with the woman who demanded the right to vote in 1648; the woman appointed Maryland’s official printer in the eighteenth century; the woman who responded to General Washington’s plea to save continental soldiers in the Revolutionary War; the runaway female slave called Moses who led her people to freedom; and the woman recognized as the invisible member of Lincoln’s cabinet credited with preventing Maryland’s secession in the Civil War. This walking tour spans four centuries of achievements by notable women, including the former Mayor of Annapolis.

This lighthearted, tongue-in-cheek tour is presented by a guide in the character of a colonial indentured servant who works odd jobs day and night to make ends meet – colonial style.
During your 90-minute walking tour around Historic Annapolis, you’ll hear scandalous anecdotes and jaw-dropping tales about what went on inside Annapolis’ famed homes and taverns. Colonial Founding Fathers, Annapolis gentry, renowned portrait artists, and regular folk, too, were all up to their tricks! There was a little revenge, murders, spying, drinking, political discord, and pleasures of the night.

The tour ends at the Rams Head Tavern for a drink [optional, not included in tour] and to learn how a pair of antique bed posts got jammed into the ceiling over the bar 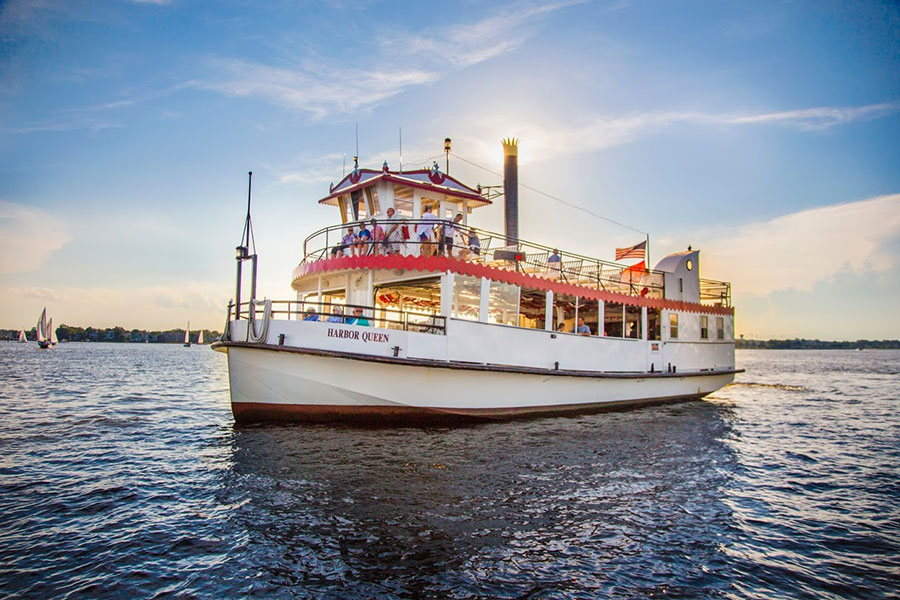 Upgrade your Group Tour and add a cruise!  Talk to our group tour specialist or click below to learn about our popular group combinations.

Watermark is proud to offer tour guide services in Baltimore. Our experienced tour guides can step on your motorcoach and provide narration of Charm City on a driving tour. In addition to step-on guide and concierge services, Watermark offers fun and relaxing sightseeing cruises out of the Baltimore Inner Harbor.