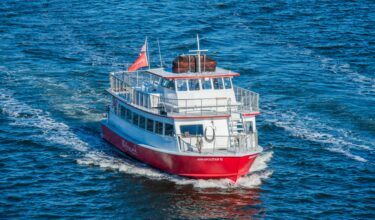 Observe the Baltimore Harbor while enjoying a lively narration. You will be transported to a time when Baltimore residents defended their homes, businesses, and land from the British once more during the War of 1812. See Federal Hill, where Baltimoreans gathered to witness the fate of their city. Cruise past Fell’s Point and Canton where swift Baltimore clipper ships were built for government sanctioned “Privateers”. Go to the Francis Scott Key Buoy where he watched the “bombs bursting in air” while being held prisoner on a British ship – and penned the famous lines to the National Anthem. You will catch a great view of Ft McHenry National Monument and Historic Shrine from the water.

Watch the fireworks from the best seat in town!3rd & 4th of July cruises in Annapolis & Baltimore
Learn more
This is default text for notification bar
Learn more