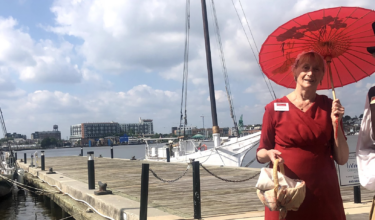 See highlighted dates below.Contact us for a private or virtual tour!

This 90-minute walking tour, offered in partnership with the Kunta Kinte-Alex Haley Foundation, follows the journey of the young enslaved Freddy Bailey, who learned to read in what was then the busy ship-building area of Baltimore known as Fells Point. Here he was influenced and inspired to ultimately spread the word of the evils of slavery as the most famous abolitionist orator. Arriving at the formative age of 8, he escaped from Baltimore to the north at 20. Walk the streets with our period-attired guide as you step back into the early 1800s and learn about the first book he purchased, the streets he lived on, the shipyards he worked for, and the houses he later purchased as a free man. The Kunta Kinte-Alex Haley Foundation receives 20% of the proceeds.